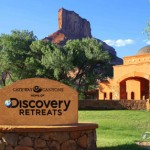 Tucked away in a red rock canyon amidst majestic Colorado mountainside, Discovery Retreats is a science-themed vacation resort envisioned as a refuge for guests to feed their minds as they revitalize their bodies.  Earlier this summer, I spent a week there attending the “Secrets of the Universe” retreat and had a thoroughly fantastic time.

Some reflections on the experience: – Gateway, Colorado is a stirringly beautiful part of the country.  Having never visited before, I found the unspoiled natural surroundings intriguingly strange, even a touch alien, as if I’d been transported to some far more hospitable interpretation of the planet Mars.  As you may know, I’m quite smitten with the natural beauty of my hometown–Ithaca, with its magnificentgorges and waterfalls–and so it was a joy to discover that the red rock formations of Gateway inspired in much the same way.  To be in that exquisite environment and not pause from time to time to look about and marvel at the wonder of existence was simply impossible for me.  An ideal place to be alone with one’s thoughts.

– But even better, I wasn’t alone: this was a very smart, fun and lively group.  Particularly the speakers who were comprised mainly of cosmologists and theoretical physicists like my friend Janna Levin, award-winning writer and professor of physics and astronomy.  You may already know Janna from herTED talk on the sound the universe makes or herappearance on the Colbert Report. – Had a great time catching up, and an equally great time getting to know and befriend the other speakers:Sean Carroll, Jennifer Ouellette, Mark Trodden andRisa Wechsler, all of whom I found impressive, personable and charming.  Respectively, they gave talks on “All We Know About the Universe,” “How Tinsel Town Does the Universe,” “Dark Matter not the Dark Force” and “Galaxy Formation in a Dark Universe” and together with Janna’s “The Sound of Black Holes,” this was an outstanding lecture series.

– Even more enjoyable than the information I learned are the memories I take away, from talking favorite time travel movies with Sean (who, by the way, was the perfect host for this, making scientific complexities understandable and fun) to bonding with Jen over writing and family backgrounds, to discovering a shared fascination for The Prisoner with Mark, to talking vegetarianism with Risa, who on our last day busted me twice in a hugely entertaining game of Texas Hold ‘Em.

– Another fun experience for yours truly: taking part in an open panel discussion with the speakers.  I was a late addition, replacing Janna (who had to leave early), and while I’m no stranger to being on panel, that’s typically been at science fiction conventions, which is very different from chiming in when everyone up there with you is a scientist or science writer.  Sure, I come from a scientific family, but my gig is making up stories about aliens, posthumans, space marines, killer pandemics and such.  Weirdly enough, this worked out well, fellow guests approaching me afterwards with appreciation for my science fictional perspective.  Part of that has to do with Jennifer’s expert moderation but also I’m quite happily finding myself increasingly comfortable with my role in the scheme of things.  As a non-scientist SF writer from a family synonymous with science, I’ve sometimes felt a little betwixt and between but these days I’m at peace with it, able to see the persepective I bring much as others do–as a feature, not a bug.  Likewise, I’m so thrilled with the wonderfully reciprocal relationship science fiction enjoys with science and appreciative for being able to provide my small contributions to that dance.  A good place to be. – And speaking of good places to be: Gateway Canyons.  Top notch resort with an impressive spa, and along with all the lounging and learning, we were able to squeeze in white water rafting, hiking, star-gazing, a tour of John Hendricks’ rare auto museum and a sunset horseback ride (incidentally, the horse in question, “Happy,” is by far the favorite horse of all I’ve ridden, the sole competition being “the gentle one” who threw me when I was 9).  On the rafting ride, I got to talk Lakota traditions with C.J. Brafford, which was a treat and creatively inspiring for something I’m writing.  Truly, a fun time, and aside from a bad reaction to elk jerky (my stomach haaaated it), my curiosity was rewarded from beginning to end.