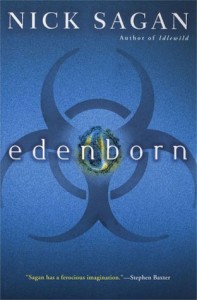 This is the Sunday to beat all Sundays –There’s green grass beneath me, and blue sky above. I’m carrying the End of the World in my veins, but I don’t know it yet.

Edenborn begins with a stark vision: Humankind is nearly extinct. Only six people have survived the devasting planetary epidemic known as Black Ep. All are now committed to rebuilding a peaceful civilization—but not everyone shares the same vision. Soon, two very different societies begin to form.What if humanity had the chance to start over? In the follow-up to Idlewild, his brilliant debut novel, Nick Sagan invites us back into his hyper-imaginative world.

As we follow a child from each “family,” someone—or something—begins to threaten their innocence. Meanwhile, a mutant strain of Black Ep makes a deadly return. Now the architects who gave breath to this new world must scramble to protect their children from a two-front assault. It’s a race against extinction, and we’re in it until the end.

“As a biologist, I am always happy to see signs that genes make a difference. Carl Sagan was surely a creative genius, and here we have his son Nick being just as creative. The characters are well drawn. This is a tale that easily absorbs the reader… If you didn’t get the hardcover in 2004, go get the trade paperback now. You’ll enjoy it.”
— Analog

“[Nick Sagan] further develops his talents and takes his characters to a higher level. Intriguing… Very dark… Sagan rises to the occasion in Edenborn.”
— Audiobook Cafe

“In the gripping sequel to Idlewild, the Black Ep plague has wiped out humankind… The story’s heart lies in the complexity of the characters’ psyches, motivations, and relationships, which propel the action and augment the overriding sense of desperation.”
— Booklist

“There’s a fascinating sadness about Nick Sagan’sEdenborn. It builds, page-by-page, into a gut level conviction that all the hope and potential combined in his futuristic characters will not be enough to overcome the relentless extinction of humanity…. Each member of Sagan’s eccentric, winsome, and fatally flawed family is drawn with an eloquent devotion and care that raisesEdenborn far above the usual plague-tale formula. The outcome is a bittersweet mixture of tragedy and self-discovery that will resonate with readers of all ages, and leave us all asking better questions about the future we are making now.”
— Bookreporter.com

“Sagan hasn’t let me down. I was eager for more of his writing and the world of Idlewild. This is excellent storytelling with science thrown in and an extremely compelling read. I’ll hold my breath for the next.”
— Concatenation

“All the best science fiction is about human beings, not technology or aliens; stories about the last men and women in the world are therefore even more poignant. But what Nick Sagan does here goes well past genre tropes and into rare climates of terror, pathology, and rage; hope, from this vantage, seems more fighterly and ragged than noble or sentimental. Edenborn is a daring and refreshing look at one too-possible future.”
— EDGE Boston

“Second novels are always tricky, particularly when they’re part of a sequence, so it is a surprise thatEdenborn, Sagan’s follow-up to Idlewild, is better written and even more tightly plotted.”
— The Guardian

“In a couple of weeks’ time, when the expeditionary party comes looking for me and finds only a smoking pair of shoes and the hastily scribbled note ‘Damn you, Sagan, you talented b-,’ I imagine there’ll be some speculation as to exactly what’s happened to me…. [Edenborn] delivers a number of powerful emotional punches…. Another excellent character-driven work of literature from an author with a great deal of promise.”
— Infinity Plus

“A rich fantasia, peopled by painfully real characters. Fit to bursting with flights of speculation that could fuel the careers of many lesser writers.”
— Kirkus Reviews

“The second in an exceptional series which, although stands on its own, I do urge you to read the first,Idlewild, first; it’s stunning. It’s about a group of people rebuilding civilization after a dreadful plague. It’s brimming with ideas, it’s hugely exciting with very real characters, it’s edgy and fast and quite wonderful. Thriller readers will enjoy it too.”
— lovereading.co.uk

“In Nick Sagan’s novel, the survivors of a plague have a chance to start all over again… [but] the new generation of humanity is, if anything, even more spiteful, schizophrenic, ideologically fixated and generally screwed up than any of its predecessors… [Sagan] knows how to keep the pages turning.”
— The New York Times

“Sagan entices the reader… A very complex and entertaining story of a small community that, even with the best intentions, nearly falls to the very human failings of greed, jealousy and murderous revenge.”
— Rain Taxi

“The blend of spirituality with scientific artificiality makes for an interesting contrast in lifestyles, while the madness… works like a virus of its own, distorting the whole experience into something increasingly dark and deadly… Edenborn ends with both tragedy and a sense of hope, setting the stage for what should be a fascinating third entry in the series.”
— Rambles

“I’m not going to hold back on this one, I believe thatEdenborn is the finest book that I have read this year.Idlewild was impressive but Sagan has beaten it with a work of such depth it positively echoes. It’s one of those few books that I literally could not put down, leaving me red-eyed but happy as I greeted the dawn, half comatose through lack of sleep. Sagan’s mantelpiece deserves to be heaving with shiny metallic awards and I certainly do not think it would be wrong to mention the word ‘Hugo.’ This is not something I say lightly. Sagan is an adrenaline shot straight into the heart of SF. Do yourself a favor, don’t miss these books.”
— SF Crowsnest

“Elegant SF, dark and haunting, with characters who linger in memory long after the last page is turned.”
— SF Site

“Edenborn is one of the best post-apocalyptic novels you will ever read. A sense of desperation and hope, of desolation and rebirth, fires the story along a wave of uncertainty that makes for a gripping ride. The survivors are depicted with a gritty, solemn realism that increases your attachment to them with every page… The story itself is one that has been thought out and rehashed so many times that to experience such an exciting and original take on it is breathtaking. With a rumbling urgency throughout, Edenborn is tough to put down without finishing, whilst Sagan’s depiction of a fragile, fallible race will bring people back to this book time and time again. It’s not often authors like Nick Sagan crop up, and it’s a crying shame they don’t.”
— SFX Magazine (5 star review)

“In the follow-up to his critically acclaimed debut novelIdlewild, former Star Trek writer Nick Sagan returns the reader to the richly imaginative future he first envisioned in that tale with a story that is bittersweet and compelling… The more you read the more you find to wonder about which makes Edenborn hard to put down.”
— Trek Nation

“Marvelous… In Sagan’s post-human future, the world ofhomo sapiens is a small and fragile one and all bets are off. Thrilling and unsettling, Edenborn serves both as a gripping stand-alone story and as a strong linchpin for where this prospective trilogy has been, and wherever it might be going next.”
— Wigglefish.com