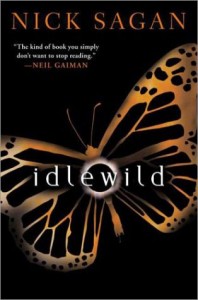 I’m not dead. A dim realization but an important one –
I should have died.
I remember the shock and –
and nothing.

Ten children are about to come of age. One of them, a young man, is suddenly startled awake. He has no memory. His surroundings mean nothing to him. All he knows for certain is that someone is trying to kill him.

Unsure whom he can trust, he is reacquainted with his peers, all of whom are being trained at a unique school run by the enigmatic Maestro. As he tries to uncover the identity of his would-be killer, it becomes clear that the ramifications of his investigation are far greater than he could ever have imagined – that it’s more, much more, than just his life that is at stake.

“Idlewild is a fantastic and thrilling novel about a young man’s fight for life and understanding of what living ultimately means. The book keeps listeners guessing until the very end.”

“Sagan has written a story reminiscent of his father’s classic novel Contact. Both look at Earth, and humanity, for that matter, as a kind of grand experiment of apprentice deities – only in Idlewild, the gods are a group of desperate scientists. Why are we here? Where are we headed? Nick Sagan’s vision is dark, stylish and, ultimately, completely enthralling.”

“This guy obviously has a sense of wonder in his DNA. This book is an essential upgrade for the Matrixgeneration – download now! Sagan has a ferocious imagination, and he knows his field; I caught echoes of Gibson, Egan, Stephenson… and he can tell a great human story: the sentence he gave to Voyager 1 isn’t the last of his words to touch human hearts.”
— Stephen Baxter

“The tension is palpable from the first page… Sagan captures perfectly the voice and actions of a rebellious, extremely intelligent teenager… Mesmerizing.”
— Booklist

“Science fiction is getting exciting again! I loved the classics when first introduced to them… but it seemed like there was little new under the sun and stars… then Richard Morgan’s Altered Carbon came along, and now Nick Sagan’s brilliant debut novel.  The story is fresh, original and engrossing… If you’re an SF fan, then rush to read this book.”
— BookLoons

“An excellent novel that nicely brings together different genres and ideas in to what is basically a well thought out ‘whodunit’. I really enjoyed this book and it has taken its rightful place next to Greg Egan and Richard Morgan on my SF bookshelves.”
— BookLore

“Nick Sagan produces a dark and imaginative first novel… Idlewild is a strong debut that should make readers eager for the next entry in what is expected to be a trilogy.”
— BookPage

“Sagan has deftly juggled multiple storylines to produce a slick cyberpunk whodunit with a tight and energetic narrative and an apocalyptic kick. Good stuff from a writer with a bright future.”
— Bookreporter.com

“Take special note of this, for a star is indeed born. The only thing wrong with this book is that it is far too short – not incomplete, just too quickly finished. The human race is in jeopardy in a story that twists wonderfully and is scary and inventive, with serious crossover potential. A genuine pageturner which cries out to be read.”
— The Bookseller

“Idlewild opens in a Tim Burton-esque world, flowing intoThe Matrix, and ending in a world reminiscent of Philip K. Dick. Our narrator, Halloween, awakes with a bout of amnesia and the feeling that someone is trying to kill him. As he slowly regains his memory, he learns that life – real and virtual – is not what he thinks. Sagan’s brilliant!”
— Book Sense 76 List

“This exhilarating cyberpunk thriller takes place at the intersection of perception and truth, and it suggests more great things to come from first-time novelist Sagan.”
— Borders

“Idlewild is Nick Sagan’s first novel, but he writes like an old hand. This is just a great story, slick writing and believable characters. Oh, and the science is pretty good too. Tight and suspenseful, this is a glorious debut and leaves me eager for more.”
— Concatenation

“I found Idlewild challenging, intriguing, and right on the pulse of today’s technophilic youth… Sagan has penned a smart, hip, entertaining puzzle. You won’t want to put it down until it’s solved. ”
— Dark Moon Rising

“Remarkably readable and cleverly constructed, this book tackles many issues, including the nature of reality, man’s inhumanity to man, hubris, betrayal and the ethics of science’s potential to manipulate human development. Clever, sharp and fresh, Idlewild is an excellent yarn.”
— Dreamwatch

“A young man wakes up in a dreamlike landscape where he has strange powers but no memory… Sagan provides plenty of suspense and perfectly captures the angry adolescent solipsism that makes kids into hackers and superheroes.”
— Entertainment Weekly

“A genuine page turner. Absolutely fun, like a rollercoaster ride of fusion fiction: starts out like Ambermeets The Matrix, and as it goes on, it turns into several something elses…. Gripping… the kind of book you simply don’t want to stop reading.”
— Neil Gaiman

“Idlewild builds, not just in tension but in what it demands from the reader, ending up as a dark exploration of hidden realities.”
— The Guardian

“It happens – all too rarely, but it happens – that once in a while a debut novel comes along that grabs you by the unmentionables and swings there, laughing like a maniac and refusing to let go… Sagan seems to delight in changing the rules just when you think you’ve got the hang of them. There’s plenty to confound the reader’s expectations, and all of it is couched in engaging, well-paced prose… As a novel, this is one of the best I’ve read all year. As a debut, it’s utterly astonishing.”
— Infinity Plus

“A dark, twisted carnival of oddities and slippery reality… Beautiful… An extraordinary ride.”
— The Ithaca Times

“Multiple layers… unfold like onion skins in this future shocker… A fun but frightening place, something like Disneyworld seen through a Hieronymus Bosch filter… Wonderful.”
— Kirkus Reviews (starred review)

“Aimed at the audiences of The Matrix and Minority Report and fans of Neil Gaiman, Orson Scott Card, and Mark Danielewski, Sagan’s novel… is a fine debut… and fans of those same authors will enjoy this.”
— Library Journal

“Nick is indeed an incredible author, and knows how to keep you on the edge of your seat, with a futuristic novel that is full of mystery, intrigue and human spirit.”
— Movement Magazine

“Reading Idlewild is an intriguing, sometimes baffling experience, but somehow never confusing or frustrating. A stunning twist of plot brings all the threads together…Idlewild is a real page-turner: an engrossing, exciting debut, and an excellent summer read.”
— NPR (WSKG)

“Excellent work. Even when you think you have it all figured out, there’s definitely more surprises in store for the reader.”
— OC Space

“In his riveting first novel, Nick Sagan both embraces and contests his famous father’s vision of the universe.”
— Popular Science

“Mankind has always strived for immortality and Nick Sagan exploits this idea and entertainingly explores some possible philosophical, ideological and religious consequences. Nature and science go head to head inIdlewild, with some surprising results.”
— Punch Magazine

“The lure of this page-turning tale rests in Sagan’s condensed style and humorous dialogue. The language is smart and funny. He doesn’t tip his hand too soon, and so the reader is pulled along by the mystery of this virtual universe, and the dangers that arise from the ability to create any reality one wants. But in his desperate desire to escape the virtual world he is in, Halloween discovers a true reality that is unbearable.Idlewild is a murder mystery and an unrequited love story set in a Matrix-like universe where everyone’s a suspect.”
— Rain Taxi

“The author’s compelling tendency to interweave mythology with his story sets him apart from less gifted writers in this literary niche.”
— The San Francisco Chronicle

“This is a gripping, fast-paced novel. The prose is incredibly lean and concise. No word dares to be there without reason to be and resultingly, it is a crisp, fresh, exciting read.”
— Scifantastic

“This is an absolutely stunning novel and a great entry for Sagan onto the scene. The text is packed full of dark humor and wonderfully evoked settings… Sagan’s characters are well defined, each has a unique personality that is striking and memorable, resonating in my mind long after the book was finished… It is rare for an SF novel to pack so much into so little space. It’s what you’d get if you took all the best bits of Buffy and stirred in a healthy dose of philosophy and seasoned it with some Grade-A post-apocalyptic pepper.”
— SF Crowsnest

“The book is already attracting a lot of attention, in part because Nick Sagan is the son of astronomer Carl Sagan, but also because it’s bloody good. Fusing elements of cyberpunk with the hi-tech crime novel, Idlewild is taut, edgy SF.”
— SFX Magazine

“[Nick Sagan] captures a disturbingly paranoid tone and delivers a mystery which gathers pace nicely as the pages turn and his alternate realities mess with your mind… A very promising literary debut which hints of wonders to come.”
— Starburst

“With clever, fast-moving writing, the energetic take-no-prisoners attitude of wild youth, and an intricate, involving plot, Idlewild serves up more than enough story to accommodate a three-book undertaking. But even on its own, it’s an unsettling, scary, and affecting look at what might be waiting in the future – and what most certainly lurks in the subconscious of the human collective. A convincing combination of dream and potential reality, Idlewild will twist and tease you until you give in.”
— Wigglefish.com

“Challenging and fascinating… Think Tim Burton does cyberpunk. Dark, offbeat, original… This amazing world unfurls and unfolds and unravels in a most delightfully twisted way.”
— WriterGroupie.com

“A stylish cyber-noir thriller from the son of the late astronomer Carl Sagan. Where his father looked ever outward toward the infinite – marveling at the enormity of existence and contemplating the insignificance of the individual – Nick Sagan looks inwards and finds the same phenomenon: limitless possibility and scope, and the annihilation of the self by comparison… Idlewild is an entrancing journey filled with both dread and fanciful possibility.”
— XtraMSN